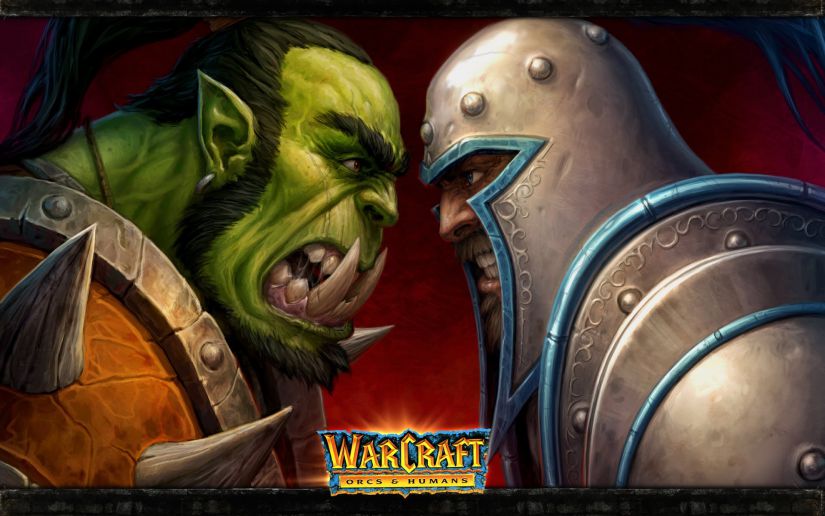 At first glance this idea is insane. But things are not so bad. It is quite simple to control everything in the first Warcraft. Mouse pointer is enough for everything, keyboard is hardly needed. In general it is not so many possible actions to perform. Not so many units and buildings to control. The game is really slow. The playing field is a grid of squares that are big and easy to tap. Selecting units by rectangle wrap has not been invented yet.

Let’s take a look at the screenshot. Imagine the thumbs tapping large buttons, buildings or orcs. Maybe smartphone screen is small a bit, but tablet from the other side is perfect! 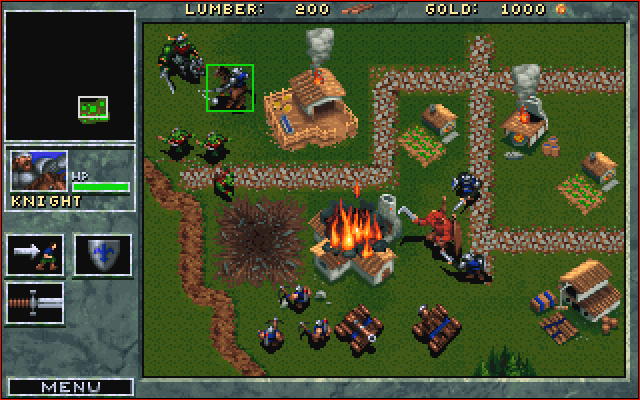 This article is an extension for Let’s run the original Warcraft on a modern computer. Check that one first for theory if you are serious about DOS games on android. Practice on the computer, then come back here. If you don’t have access to the computer you should check that article anyway and then repeat everything on phone. It will be difficult, but possible.

And there is no options for iOS, by the way. There may be a hope for iDOS, but according to author’s article there is no hope.

Android version is not presented on DOSBox website. I guess that running DOS on smartphone needs some additional functionality like customizing mouse and keyboard, a virtual gamepad and joystick, gestures settings and so on. And all of this is beyond the scope of DOSBox.

But android developers made some stuff. Lots of this DOSBox “shells” can be found in Play Market. Different quality, as always. I haven’t checked all options, just picked aFreeBox. It looks “cleaner”, takes you to DOS immediately, doesn’t ask any questions. 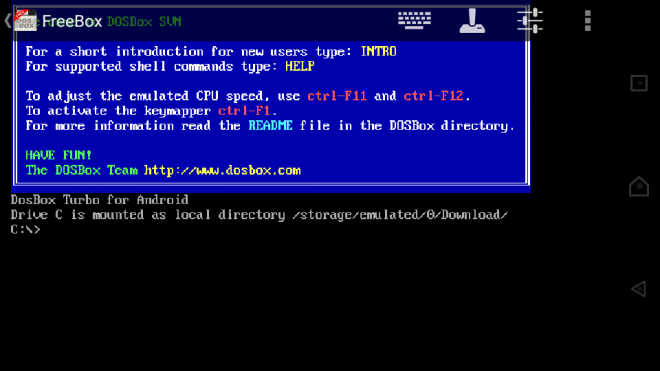 If I understand correctly there is no difference between DOS in DOSBox on a computer and DOS in this kind of DOSBox shell on Android. It is the same DOS in the same configuration on the same machine. So we don’t need to deal with game disk, installing, patching, and the registration of the game. We can simply copy files of the game we installed on the computer to smartphone.

Let’s grab this folder. It contains save files as well, if you have already played. So you can continue playing on phone or tablet. It makes sense to archive it first. Do it and think how to send archive to smartphone.

There are many ways to send the file to your phone. I use Dropbox (this is an invitation link with some bonuses). I like Dropbox. 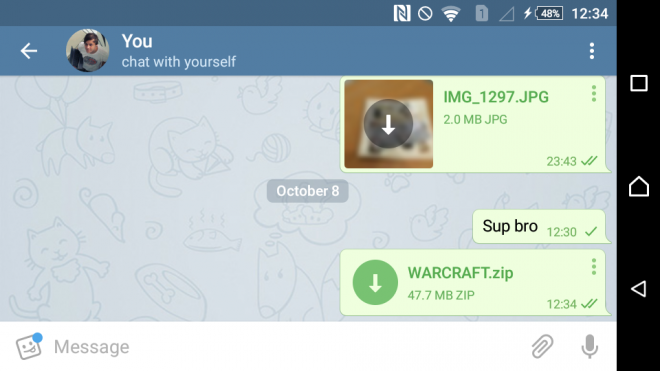 Anyway when file has been downloaded to the phone it will be stored somewhere called Downloads. Let’s figure out what this mysterious thing is.

Working with files on Android

You can plug smartphone into computer and see all the folders and files that are on your phone if you are lucky with device you choose. You can walk through folders, look around, unzip the game and move it to the right place.

I wasn’t that lucky. My smartphone wants to install some additional software on the PC and configure some synchronization. And it doesn’t work. Anyway we no longer need the computer, let’s just leave it. Since games was sent everything else can be done directly on the phone. 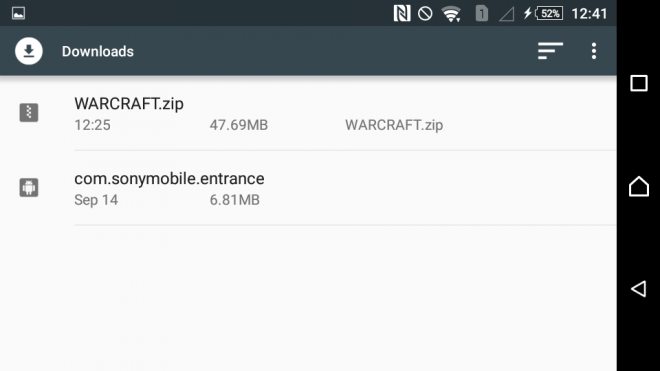 However functionality of this file manager is limited. It is possible to navigate through folders and files, but I couldn’t find a way to check the real path from the root of phone memory to the folder. And we really need to know these paths. So let’s forget both of this apps and look for something else.

I liked ES File Explorer. Nice one. Install, run it. It looks more serious, more flexible. I recommend to take a look around files and folders, examine the structure of the phone. If you get lost, you can use the search or shortcuts in the Favorites.

Here we see two big buttons on main screen. Obviously it is an internal phone memory and external memory card. 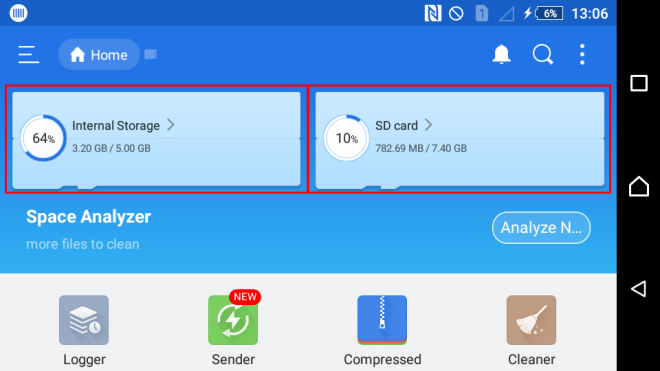 You can think about it as a root of drives. And it is a big mess of system folders and applications stored inside. 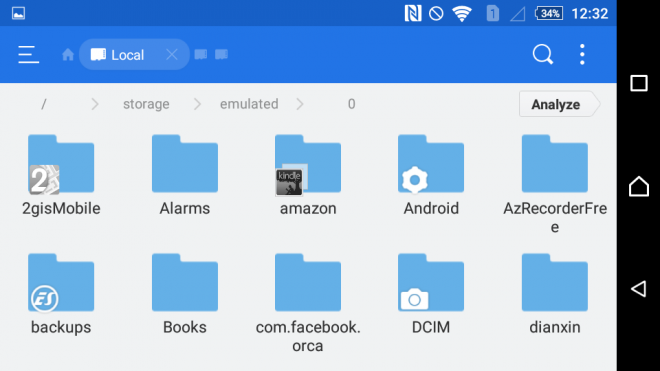 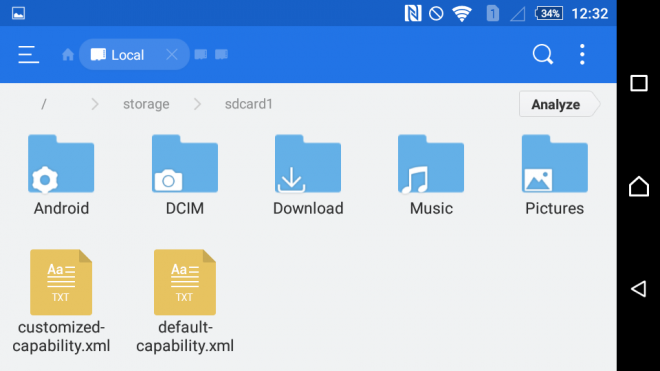 Very consistent, Android! Also people say that this structure may vary from phone to phone. Please comment about it. 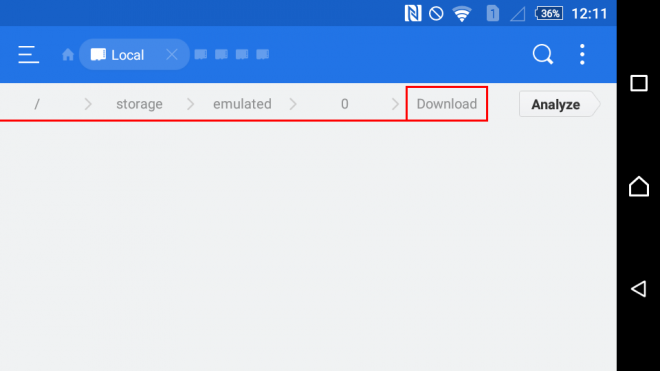 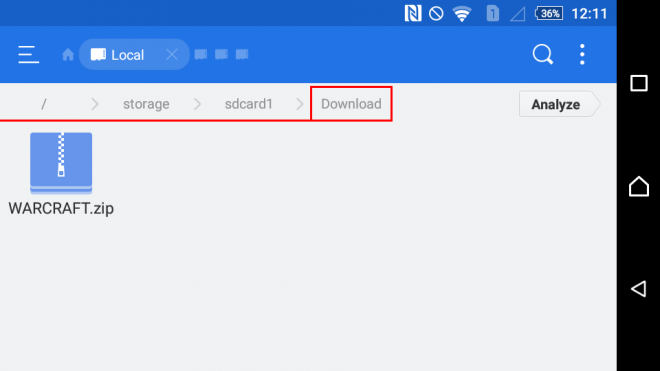 In my case Warcraft was downloaded to Download folder that is on memory card. Let’s move it to the proper location.

I decided to store all DOS files on the phone memory. Somehow it didn’t work well on memory card. Android does not allow to write to the memory card neither to ES file manager or DOSBox. It seems to be read-only. The game will actually run from it but you will not be able to save progress.

Navigate to the root of phone memory /storage/emulated/0/ and create DOS folder same as before.

And create a GAMES folder as well to make everything same to what we done on a computer. 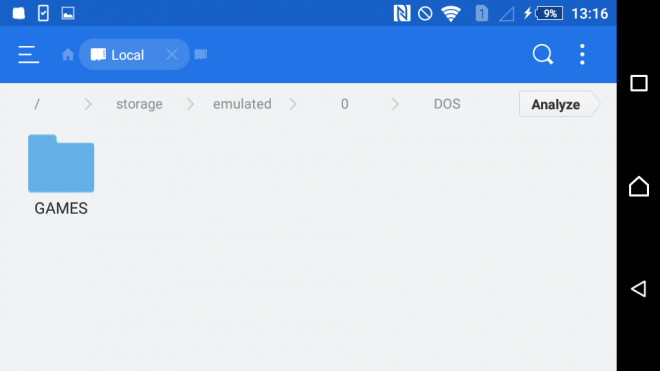 Let’s take warcraft from the download folder. You can cut and paste it here, in the newly created folder. And then extract to the current folder. Or you can extract it directly from the downloads to a new folder for DOS games. Let’s try out the second way but it doesn’t matter.

What matters is that in the end we need to have an installed game and need to know path to it according to android mess in folders and files. Let’s check one more time. 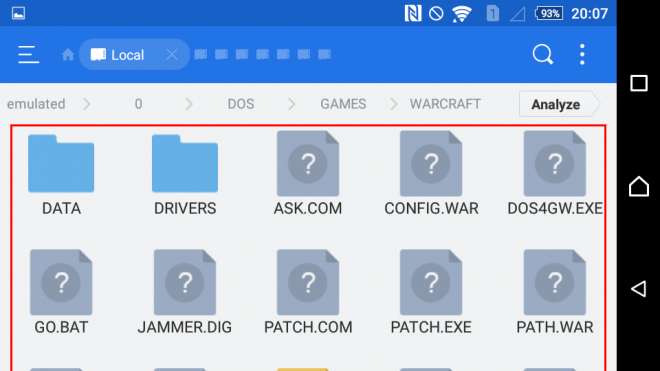 Actually breadcrumbs on screenshot above gives us an idea where we are. But let’s check exe-file just to make sure. 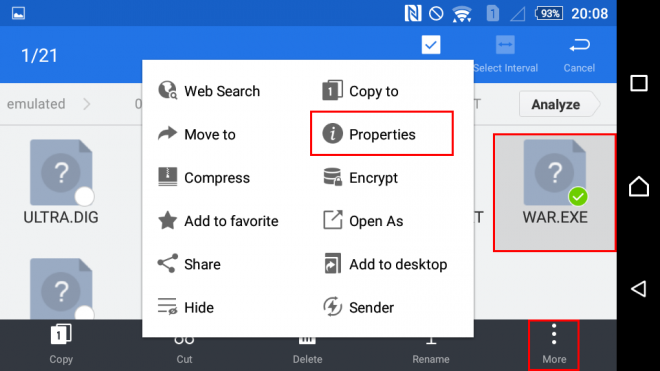 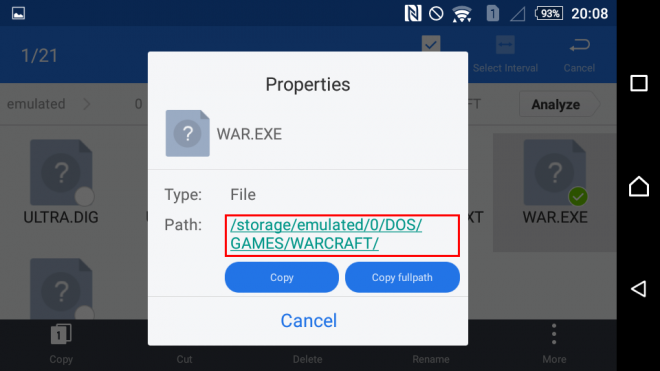 Write down full path to the paper and open DOS!

Let’s run the emulator and take a look what it says. It has mounted download folder of the phone memory to drive C: already: 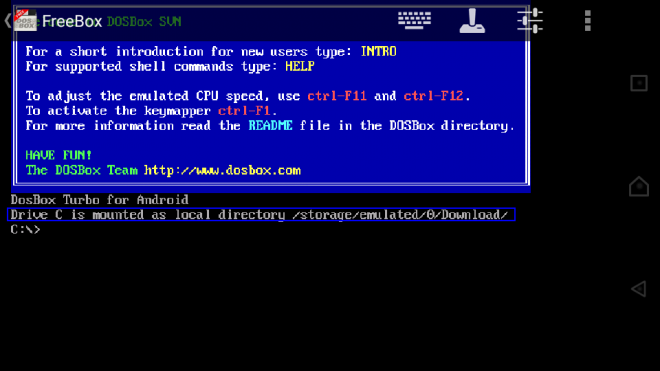 Well, who keeps such important files in the download folder? Not us. Unmount drive:

And mount it proper way: 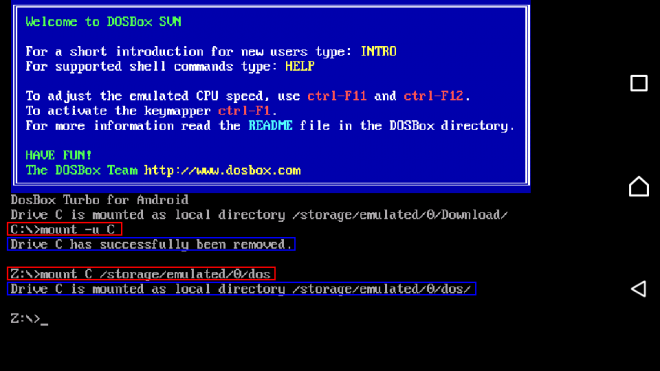 Move to C: drive and navigate to Warcraft: 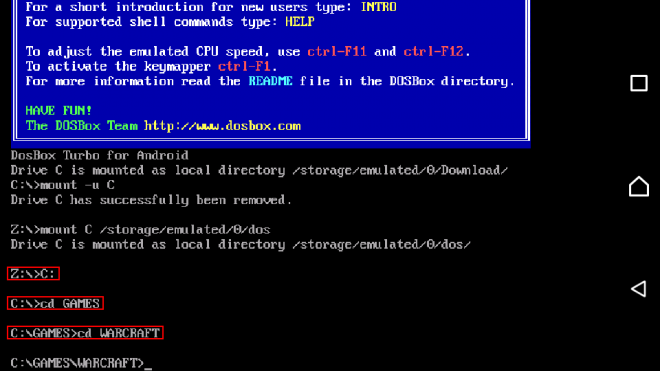 Check that everything in place 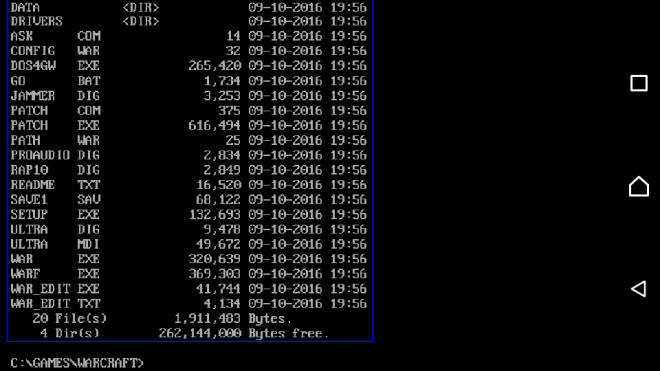 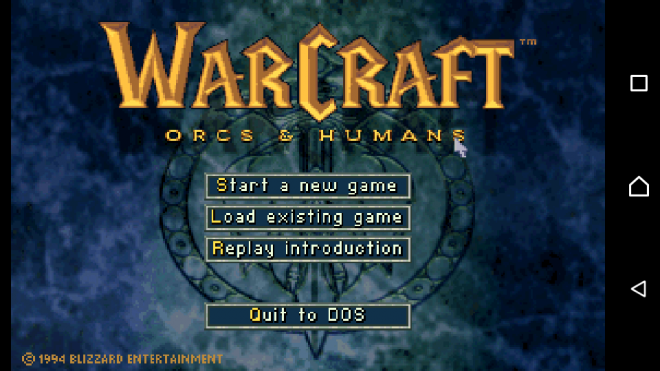 It wasn’t that comfortable. With paper. Right? Let’s check settings. Then DosBox settings. And search for Autoexec.

And here we see commands that are being executed automatically at startup. One command, one line. Let’s edit the way we want. I like this: 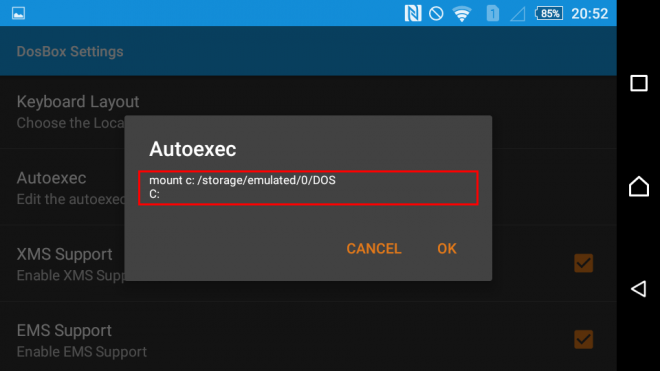 You can also add cd GAMES and dir if you plan to play games only. Like so: 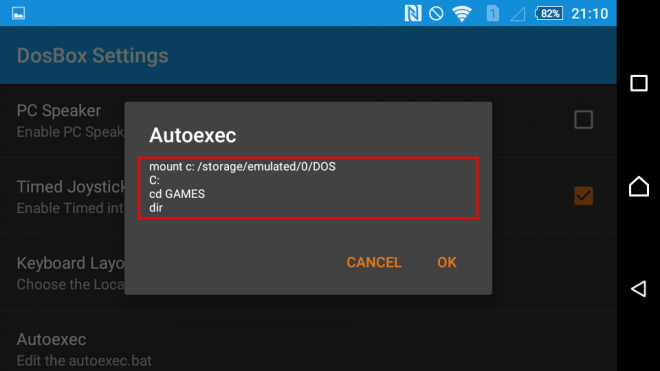 It will open game folder and show you a contents of it. Like a showcase.

Or you can just run warcraft. 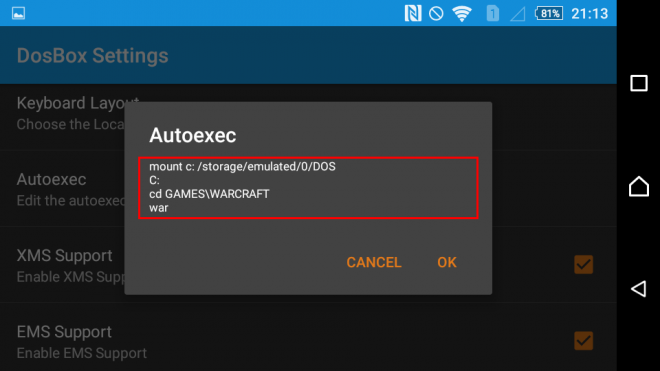 Obviously a single tap at the screen is a left click. What is not obvious that a double tap is a right-click. But it is. Surprising but it is perfect for Warcraft. For other games you can reconfigure it. There are many actions you can set. Clicks, double clicks and mouse buttons holding can be assigned on different gestures: single tap, double tap, tap with two fingers. And so on. 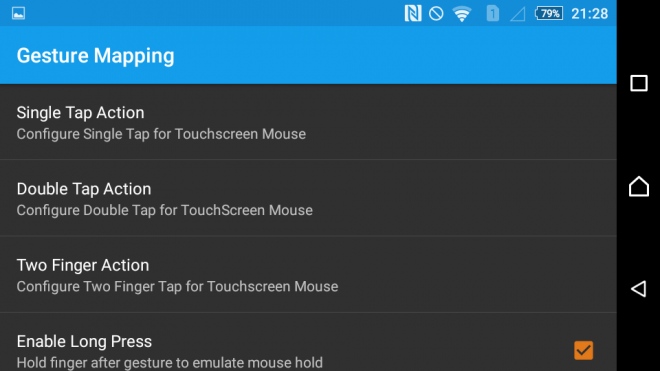 Pointer moving is more complicated. There is no pointer on smartphone, you just have nothing to hover. We have two modes to deal with it: relative and absolute.
Relative is enabled by default. In this mode, you need to move your finger across the screen to move the pointer. And it is not what we looking for to tap on soldiers.

Absolute mode suits Warcraft well. Сursor can not be moved, but it can jump to the point where screen was tapped. It is kinda teleporting. It turns to be more intuitive control for the phone. Look for Mouse Tracking option in the settings, and switch it to the absolute. 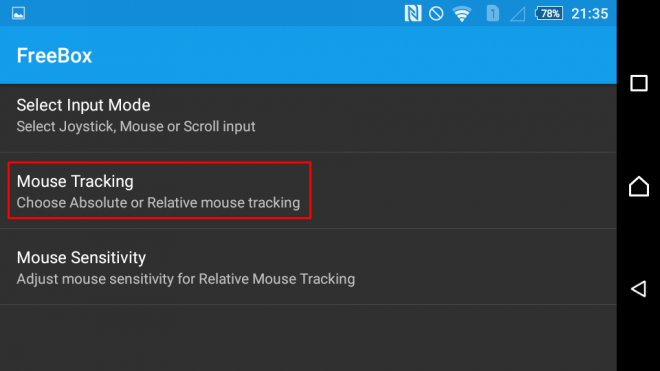 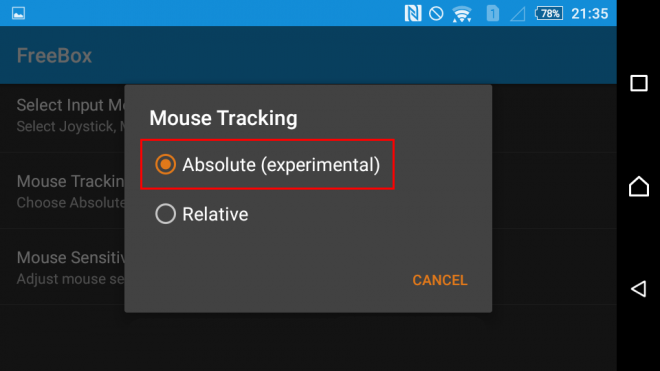 The first warcraft can be played without keyboard at all. But if you need to type a name of save file or press Enter, you can use default keyboard. 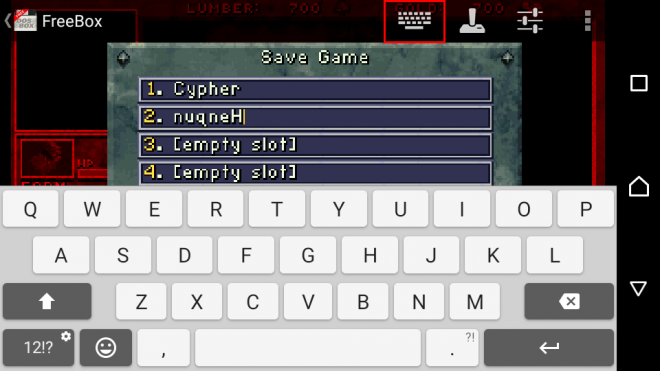 Tab key or something can be forwarded to the game using Send Special Key from the shortcut menu: 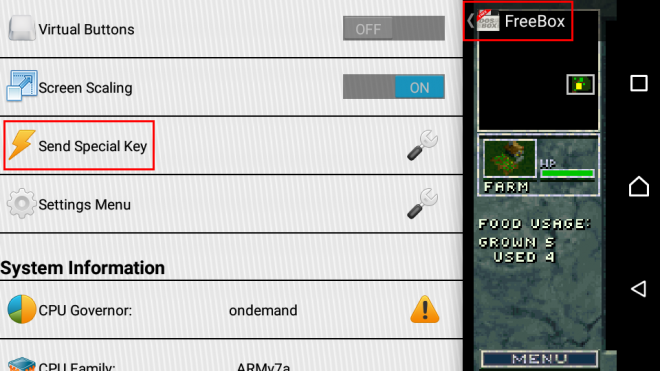 Warcraft is designed so that all actions in the game you can perform by mouse only. And the absolute tracking of mouse allows you to perform all these actions by tap. In some sense it turns out even better than playing on the computer. It is not necessary to aim using cursor. You can just hit things directly by finger. The only disadvantage is that if there is no pointer, there is no hovering. For example, when you ready to set a new building, you can not see where it will take a place.

At first it seemed to me a serious problem to navigate through the game map. It was necessary to move the cursor to the edge of the screen to relocate it. This thing will not work with absolute tracking. We would like to swipe the screen to move map. It seems very natural. But there is no way to set it up. If only the game screen can be moved with the mouse. While holding the right button, for example. Like in the Red Alert. In this case we could try to assign this action to swipe somehow. But no. Warcraft can’t do it. Even now.

However right click in Warcraft moves the screen to location where the right-click was made. And this is salvation! It is more or less convenient to move the screen for a short distance. Just make a double tap at the screen corners. And if you need to move to far away location you can hit the mini-map. This is not really a solution, but rather another compromise. There is still some cases when navigation is not perfect. For example when soldier is already selected and assigned to do a move action but you still need to move a screen first. 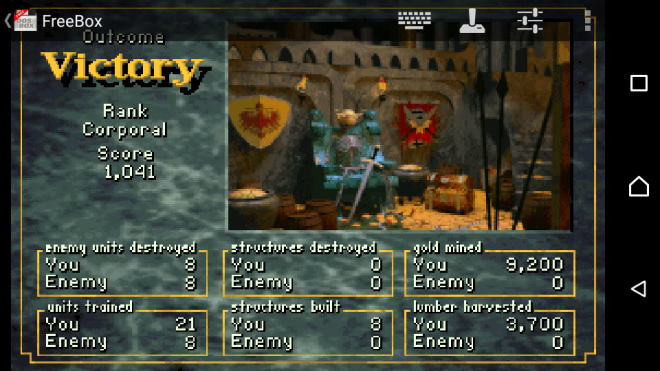 That’s all. Give me some ideas what else can be played on DOS with acceptable one finger control.