A friend showed me the game. For smartphone. The game really surprised me. First of all by its design and gameplay. What is even more surprising it is possible to make a great game for smartphone.

I feel sorry for people who play video games on smartphones. I also dislike you. You, guys, kill the video games industry. Well, it is ok to shoot pigs by birds for a few minutes in subway. If your job is not really intellectual, it is ok to keep you brain in shape by moving tiles numbered by power of two. And even feeding alien frog by candies when you are waiting a girl for a date is still ok. But if she didn’t appear at all it is a time to take PSP and play Final Fantasy. 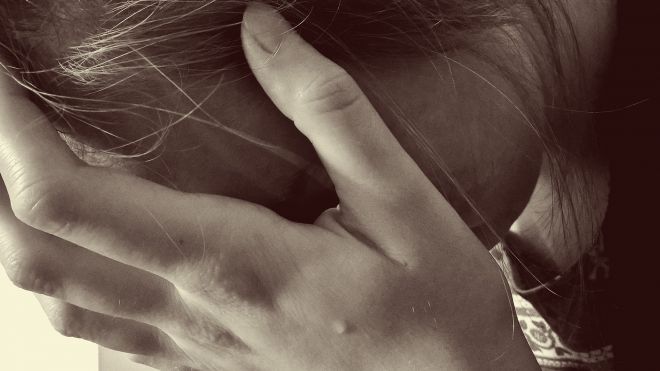 Mobile games to real video games is like a vending machine coffee to real coffee. Or tea made from tea bag to natural tea. It is tasteless and has no taste. Actually, who cares? But somehow it happened that money runs into that industry. Significant amount of money also left the grown‑up game market of personal computers and game consoles. After little timekiller games which suits smartphones well some people began to make big games: fightings, action games and racings. Another guys started to create strategy games, RPG and even MMORPG. And rest of people play like crazy. All of this is flavored by ads and in-game purchases. 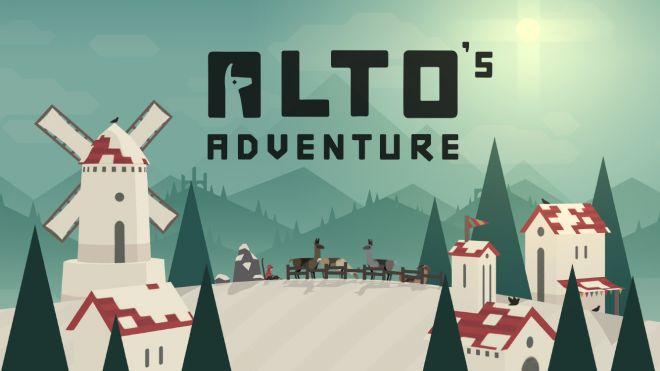 In the beginning of 2015 was launched a game that is perfect from all sides – Alto’s Adventure. First on the iOS as it should be and a bit later on Android. It was also released on Kindle Fire, that e‑reader device which neither your or me ever held in hands.

The game is developed by canadian studio Snowman together with freelancer Harry Nesbitt from England. Snowman wrote that they knew they didn’t want to build a typical mobile game, but rather something with a strong, distinctive look and feel. That is where they seek for Harry who made design and programming of a game.

Alto’s Adventure is a game that knows its place, and that is what makes it the best on its platform. This game is about snowboarding but it is not trying to compete with grown‑up snowboarding simulators. The game is not even trying to be a simulator. In fact there is only two tricks in the game: backflip and grind. Tap the screen for backflip and hold a finger for double or triple. Grinds performs automatically if you jump on the cabin roof top or flag lines. Perfect controls for the smartphone. Simple as it should be. You can play by left or right hand. Even with a paw, if you are cat.

But it is not that boring. Kiss the rail and Proximity flip are also counted as trick. Jumping over chasm or smashing pile of stones at high speed are counted as well. Of course tricks can be chained into combos. 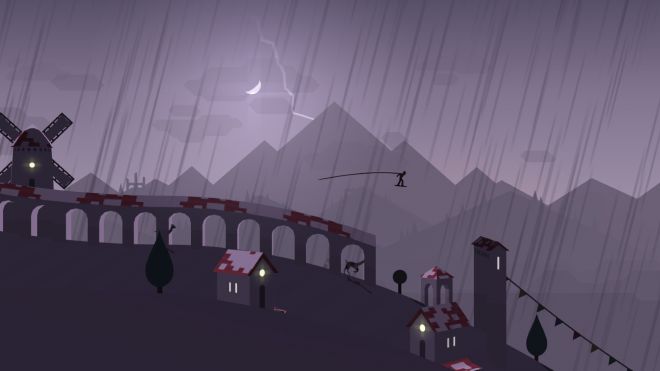 It seems to be a genre called endless runner exists specially for mobile platforms. I call it triple‑Z game class, lol. So in Alto’s Adventure we move right infinitely, score points and trying to reach some goals. The game is divided for 60 levels, each one has a 3 goals like make N points combo or land M tricks combo, collect 100500 coins in one run or catch 10 llamas.

Actually this is how game begin. Llamas run away. So you take a snowboard and go to catch them. All of this sounds cool like Heavy Metal, but eventually llamas is the last thing in the game. In addition to the llamas we face elders every 3km. Better to stay away from them. They will try to beat you down. 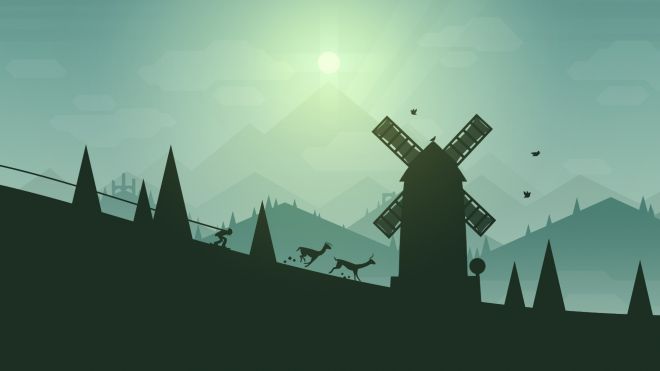 We also have some power-ups: coin magnet to collect gold faster and hoverboard, lol. The most important thing is wingsuit. You have to work hard on collecting coins to unlock it. Wingsuit is not available at the beginning. But it worth. It turns gameplay inside out and things become much interesting.

Crash by heaps of rocks and campfires or falling into a chasm is the ways to die. Those things appear on endless track randomly. Of course there is some patterns in how level generates but everything is random. Like maps in Diablo. In other words it can not be that few elders attack in the same time or you have an awful long roof to grind. Random is an important part of the game. 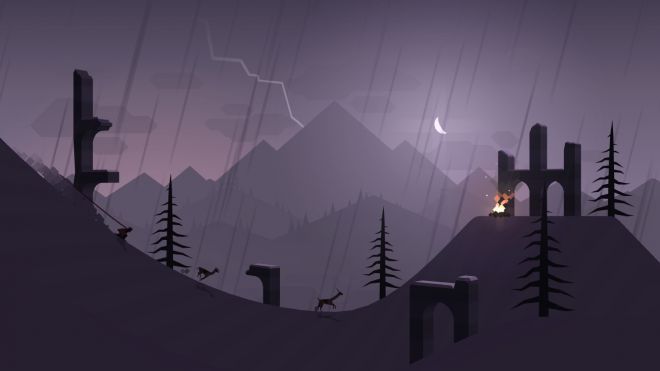 Six characters can be unlocked as you progress through. Each has its advantages and disadvantages: some perform backflips faster than others, while others are able to double jump. It is important to switch between them during the game, to deal with various goals.

As a result the gameplay based on finger tap is excellent. Look how many things. And I must say that the game difficulty is just right. Not so easy, not too hard. If only you’re not one of those gamers who grew playing smartphone games. In this case you risk to shit your pants. One good thing is that in‑app purchases doesn’t affect difficulty at all. 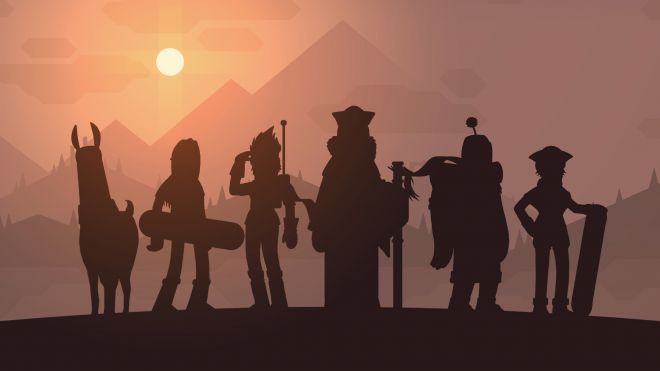 At first I could not believe my eyes. They made a flat design game! It’s a design mainstream, in which we make websites, mobile applications and software, if you don’t know what that is. You may notice that everything has changed to be flat in the last five years. Everything from social networks to operating systems of computers and phones. So, once again: Alto’s Adventure – a flat design game! And it looks awesome. I am telling you! Simple shapes, beautiful colors and parallax effects – the game shines and sparkles. 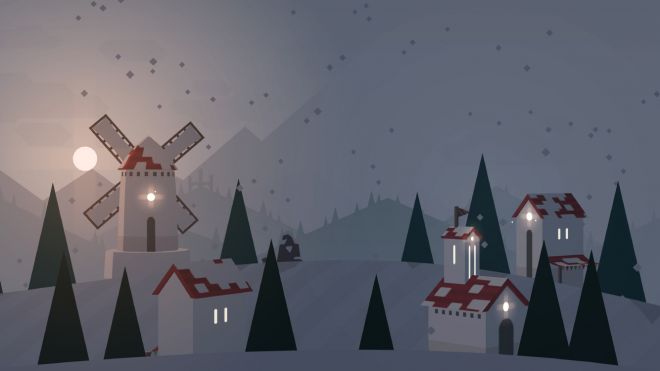 One more visual features is a change of weather and time of day. At dawn, the sun is shining insanely beautiful, and there is a very nice sky at sunset. Scarf and wingsuit are shining nicely at night and snow looks cool at afternoon. The clear weather is changing with a blizzard or rain.

Soundtrack is on top as well. Sounds like a magic, mysterious. Unfortunately it is only one music track at all. This is perhaps the only flaw in the game. Sounds of snowboard, grinds, heavy landings is quite realistic. The game is felt very serious and adult, especially if we try to compare Alto’s Adventure to dumb smartphone games with dumb cartoonish design. 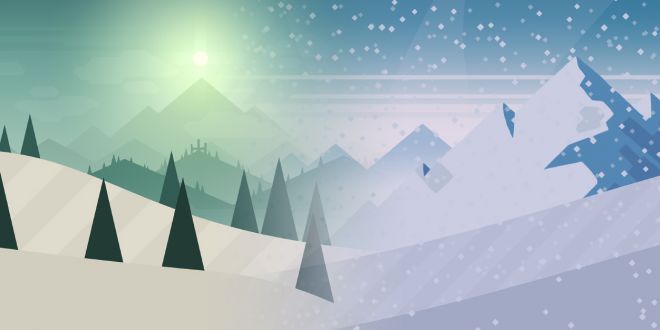 The game has its own currency – gold coins. They are scattered on the level to collect. You can improve your character buying power-ups in game store with this coins. And store doesn’t force you to spend real money. The game itself costs $2.99 for iOS. Pay once and that’s all. Just like adults do.

Android is more complicated. The game is free and not really affected by in‑app purchases. You can buy coin doubler or just extra coins but it is nothing. It is not gonna make you cooler or more successful than other players. But here is 2 extra life. If you fail on the level you can either continue playing for 2500 coins or watch advertisement. 2500 it is too much so this choice is not really a choice. But watching few ads is fine if you really want to keep playing successful run. 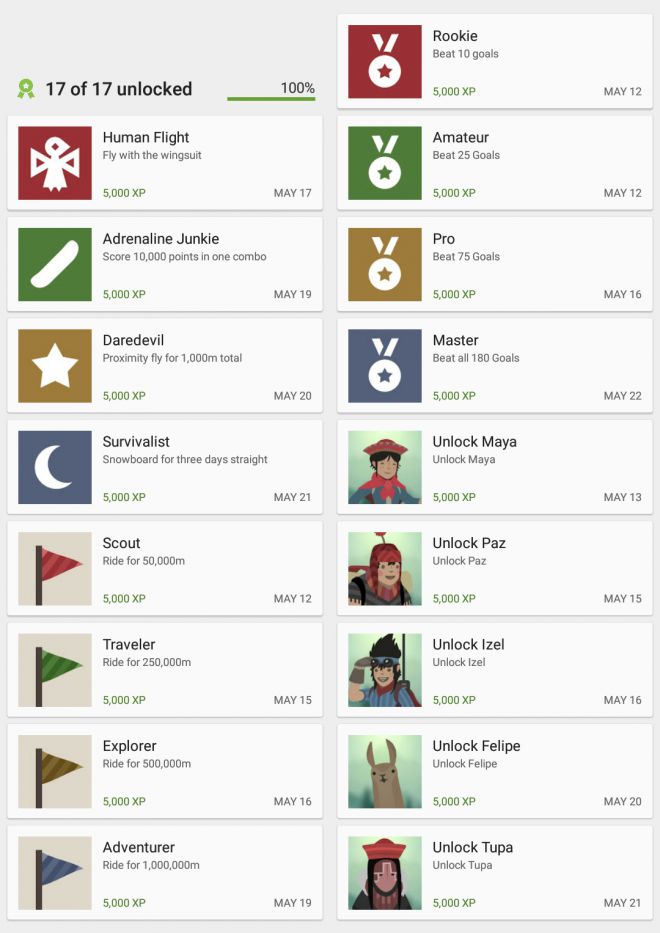