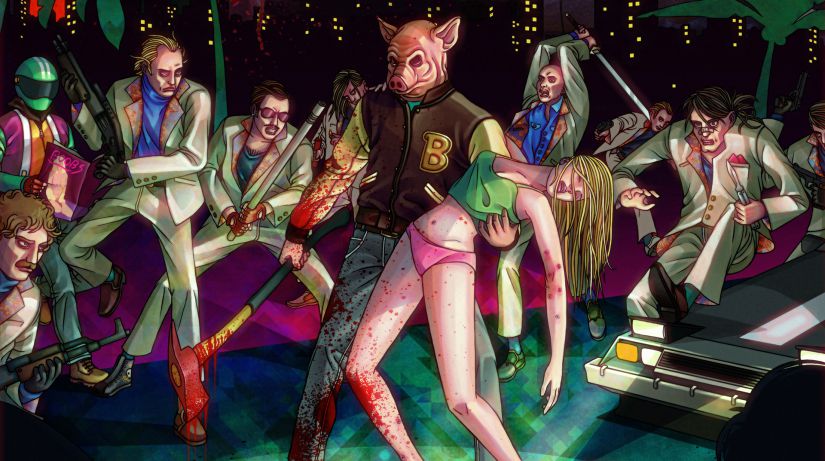 Hotline Miami is one of those games, you know, from which you expect nothing. A game for bulls and midgets. And you buy it just because it’s cheap on sale. This is a shitty indie, pixels, retro like stuff of what we all are already sick. But it’s necessary to play. Because indie, retro and pixels is everything for us.

People! Look around! Market is trashed by this kind of games. Right before Hotline Miami I have finished a Retro City Rampage which was supposed to go well but it wasn’t. And Hotline Miami suddenly was. And how good it was! But at first let’s talk about morality.

Killing people is bad. M’kay? Cruelty and violence has no place in the world. And a Hotline Miami is very brutal game, and there is lots of slaughter. Worst of all is the fact that the main hero, who we actually play with, who represent ourselves in the game, isn’t a brave soldier who kills people because the debt and not the policeman who fight the bad guys. He is a bloody hitman who are told by masked people what to do. And he really does all these things.

The game begins as follows. Could this lead to something good? I don’t think so. 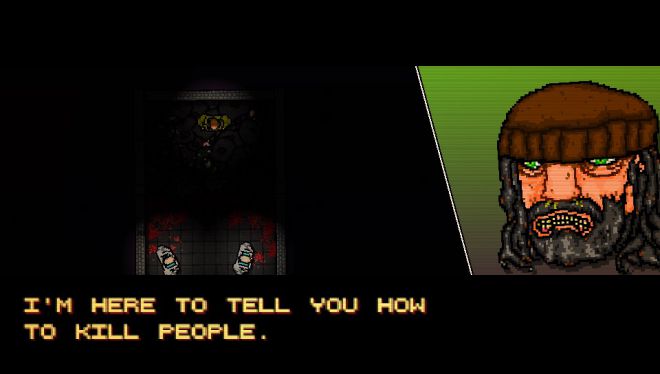 The game revealed the criminal world. I personally don’t know how well, but must be well. Here is a criminal clashes, assassinations, the Russian mafia. Sometimes you can see a tortured people, stoned girls chained to the bed and so on. The orders to kill you get by covert phone calls as it should be in this genre. I guess it is the reason why we call it a Hotline Miami. 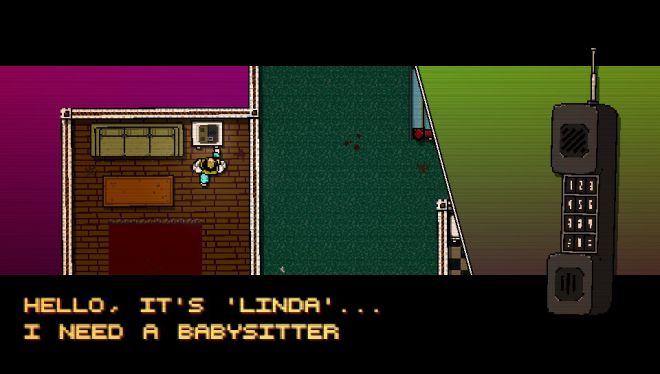 Hotline Miami share the shelf with GTA and Postal and this kind of games should not exist at all. It’s disgusting. We should ban them all. Instead of them we should provide adults with a copies of Senran Kagura, teenagers with Final Fantasy, and children with Tony Hawk’s Pro Skater. If you like the role of a hitman, the sound of bones crunch and drill in the eye, well, I have very bad news for you.

Same here. Hotline Miami is brutal crime thriller wrapped in soft and harmless cover. And it looks very cool! Pixels are not excuse to the violence of course but if it happens to play violent game it is better to be pixelated retro like game than something realistic. 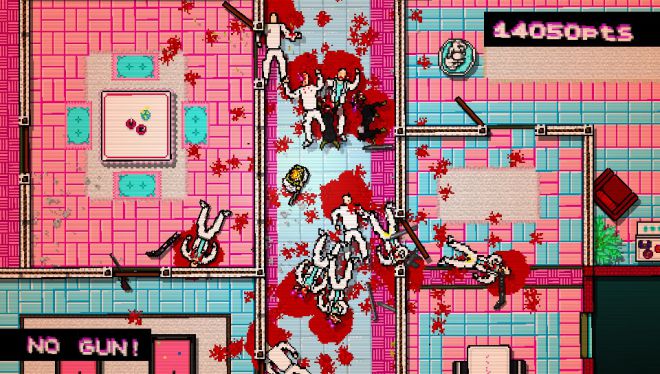 This game is very beautiful and stylish. Firstly, it really looks good. Pixels, shadows, fonts, all this visually. Excellent. And the picture is highly detailed. Weapons, clothes, furniture, you can take a close look and recognize stuff. 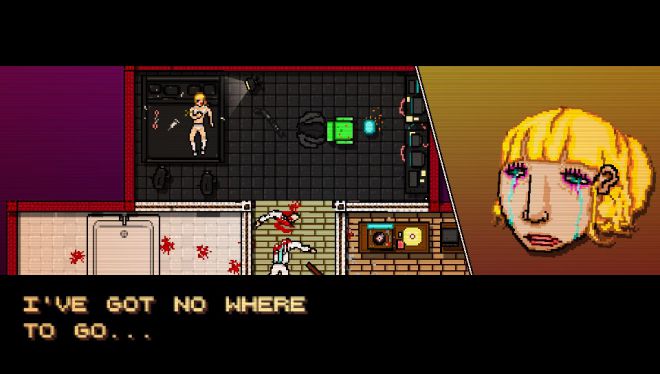 And secondly, game is very stylish. This gangster romance is kinda praised. Like in those films about gangsters, that we all watched being a child just because it was the only one TV set in the living room and nothing else around except that telly. The point here is that killing can be beautiful and being gangster may be cool. Not really. Well… at least in the game.

One feature of the game is the Masks. It is actually a part of the gameplay, but at the same time they are made so stylish and they are totally cool. At first it looks a bit creepy, but then you can’t imagine a game without it. 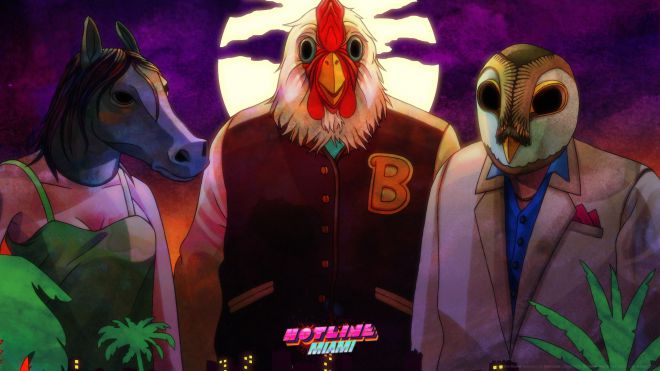 Music is awesome. Sounds like an old school. Not like a disco ’80s, but really good and very dark sometimes. Check it out.

Gameplay is rapid. You sent on a mission, you get into the car, you find yourself on the site of the coming crime. Need to clean up a couple of floors from armed thugs. And here starts a massacre.

You kick into the room, you kill the first bandit by door, cut second one by half using katana, grab his shotgun and shot the third, fourth, fifth. Then you throw the shotgun in the last enemy when you run out of ammo, then catch up his crawling body and execute the fatality. Meanwhile, a huge dog appears from behind at the corner and bite you to death. All of this takes a flash moment. Then you restart, repeat with a bit different timing and do so a thousands of times.

Hotline Miami is not a stupid slaughtering. Although the slaughtering is one of tactics. Sometimes it is necessary to take a break and think, make a plan, switch to stealth tactics and give up on firearms. Another times you can try break through shouting left and right. And it also happens that you just can’t go without a shootout.

What I liked the most is getting A+ rank for the missions. There is an achievement for doing this. And you can’t proceed easiest way this time. Most likely that you will need to use inappropriate tactics in inappropriate places. From one side you can try to kill enemies in one long combo and from another side you can try to kill separately counting on executions. Better to try different masks cause they give different power ups. And in general, you know, just need to try hard. 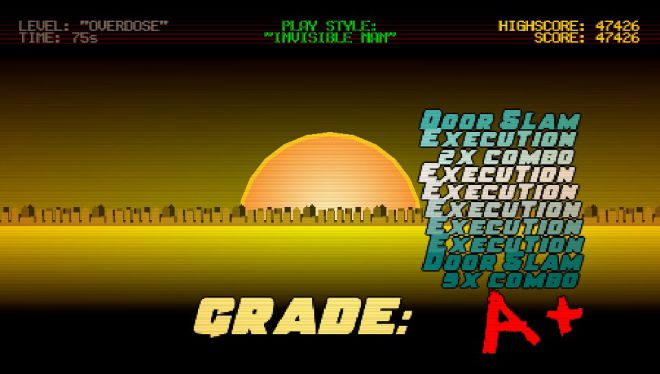 It’s a great game. Of course this is not an AAA-class project, but it is a TOP game for it’s class. I played on PS Vita as I usually do and I can say that it is a must have for Vita. It is comfortable to play for a short time for example for 15 minutes intervals, and it is also comfortable to stuck on it for hours. This game can take you away.

Hotline Miami was also released on all possible PlayStations and computers. Not sure if I would play on PS3 or PS4, but who knows. It could happen. And for completed morons the game has an android release. But I guess there is no way to play it unless you plug-in a gamepad to smartphone. 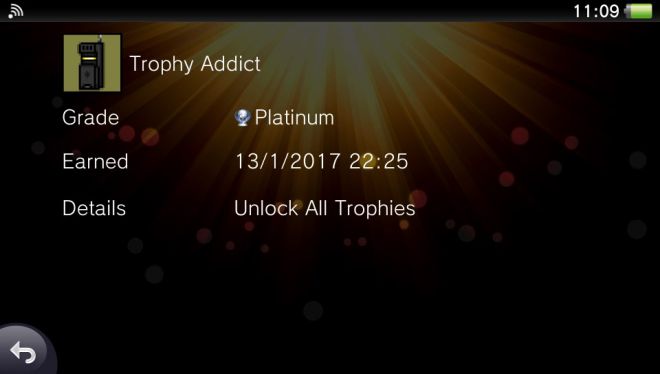